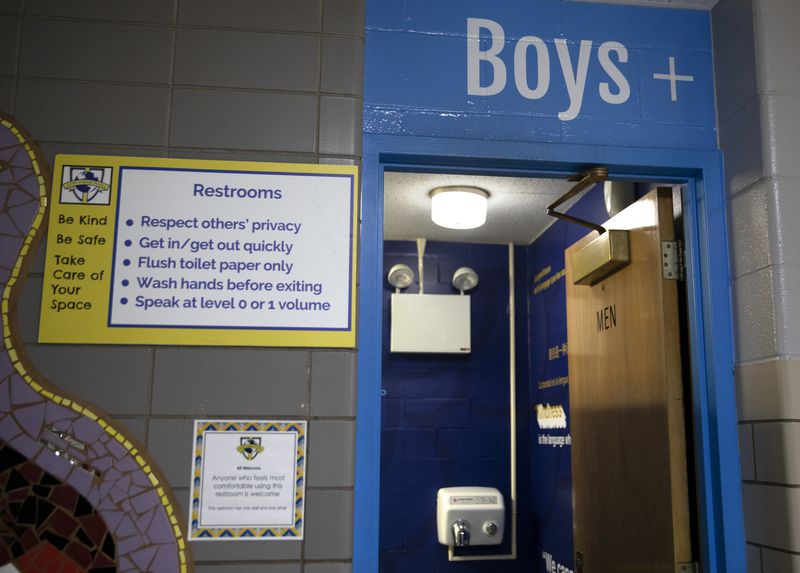 Chicago Public Schools has directed school leaders to post signs the district says make it “clear that our restrooms are open for use to anyone who feels comfortable in that space.”

CPS officials and health professionals answered questions about the new signs — which have drawn criticism from some parents — in an hourlong online session Tuesday. “Boys+” facilities have stalls and urinals, while “girls+” restrooms just have stalls. All who “feel comfortable” can use those bathrooms, but one CPS principal noted Tuesday that it’s “not a free-for-all.”

Schools must also offer single-stall restrooms for any student. Staff members continue to have separate restrooms.

“I understand that people are interpreting this as like, ‘Oh, anyone can use any bathroom now.’ That’s not the case. That is not what’s happening,” said Booker Marshall, LGBTQ+ and sexual health program manager in the CPS Office of Student Health and Wellness.

“Let’s say a (transgender) boy wants to use a boy’s bathroom, but maybe adults in the building see them as a girl physically, right? Sometimes those students get blocked from using a bathroom that affirms them because of transphobia, because of prejudice. What this signage does is makes it really explicit for our young people that they know that they can use the bathroom that aligns with their gender identity.”

The district announced the new signage in a video posted to social media Nov. 27 and on Dec. 3 in a weekly newsletter emailed to families.

“Posting these temporary paper signs is the initial step we are taking while the district works on a long-term strategy for permanent restroom signage that is gender inclusive,” Camie Pratt, CPS’ chief Title IX officer, wrote in a letter to parents.

CPS representatives say the signage aligns with guidance published in June by the U.S. Department of Education’s Office for Civil Rights affirming the rights of transgender students.

Because the federal guidance was announced after the district’s annual budget had been set, CPS said, the cost of permanent signage will be part of next year’s budget. School leaders are using their own budgets to cover the cost of printing temporary signs, CPS said. Signs were supposed to be up by Dec. 1.

Christopher Graves, principal of LaSalle Language Academy, said during Tuesday’s online forum that the school in the Old Town Triangle neighborhood “ungendered” its bathrooms “for safety purposes” earlier this year when it welcomed some students back for in-person learning.

“Instead of ‘boys’ and ‘girls,’ we had ‘one’ and ‘two,’ so that one teacher could take all her students to one restroom and one teacher to the other,” Graves said. “What we noticed from March, April, May and June of 2021, when we did the hybrid reopening, was there were no issues. Students used the restroom. They were respectful. They followed the rules.” 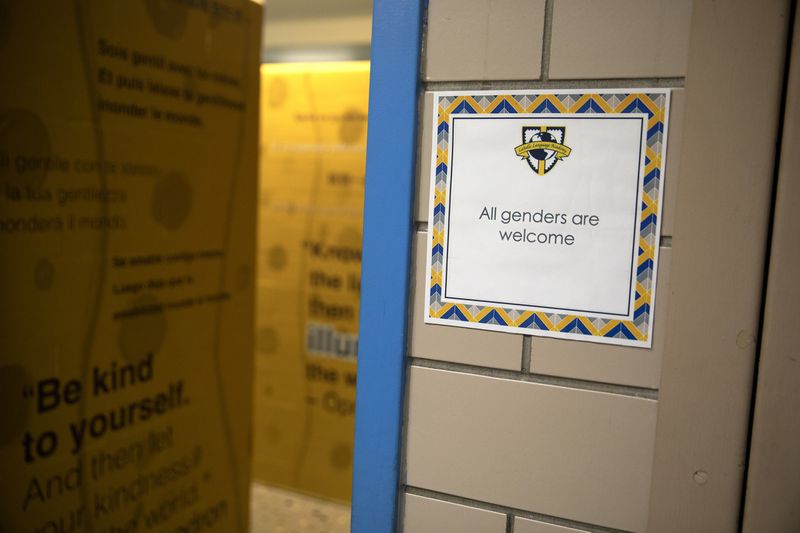 CPS says individual schools may make different choices about how to implement the policy.

Some parents want it dumped altogether. A change.org petition demanding CPS “rescind this ridiculous and disgusting policy” has garnered more than 2,900 signatures. The petition was circulated by the Chicago Republican Party.

Kelli Denard told the Tribune she heard about the new signs from that organization and opposes them. “Even though my son and I share a bathroom, we don’t use it while the other is in the bathroom,” said Denard, whose son attends Gwendolyn Brooks College Preparatory Academy in the Roseland neighborhood.

“If CPS is all in on gender equity, then I expect to see signs for the offices where CPS employees work as well, in all of their offices. What’s good for the goose is good for the gander.”

The district indicated there are “men’s+” and “women’s+” signs as well.

CPS says it continues to engage students in policy development on LGBTQ+ protections and supports. A 2019 youth risk behavior survey found about 23% of CPS students identify as LGBTQ.

In her letter to parents, Pratt pointed to a national study that determined about 4 in 10 transgender students avoid bathrooms at school because they feel unsafe or uncomfortable. In 2016, CPS announced that transgender and gender-nonconforming students would be able to use restrooms and locker rooms that match their gender identity. CPS guidelines from 2014 affirmed students’ rights to use names and pronouns that reflect the gender they identify with.

Derrick Little said Tuesday he graduated from Urban Prep Academy in 2014 and now works as a sexual health specialist with CPS’ Office of Student Health and Wellness — even though he’s often reminded of the homophobia he experienced as a student.

“We have a responsibility to our students past, present and future to address the harm they have experienced and continue to create a safer school district where they are able to thrive,” Little said. “Being able to use bathrooms without threat of violence or harassment is a human right, not a privilege.”